They bought a run-down cottage built in the mid 1700’s on the tip of Cape Cod but soon discovered that it had practically no foundation and was hanging on for dear life to tree stumps in the sand! They didn’t let that deter them and went about restoring this old sea cottage while making sure to honor the integrity of the structure. Today’s Eclectic Home Tour of The Groggy Anchor takes us inside this stunningly restored home filled with nautical inspiration and coastal antiques and collections. 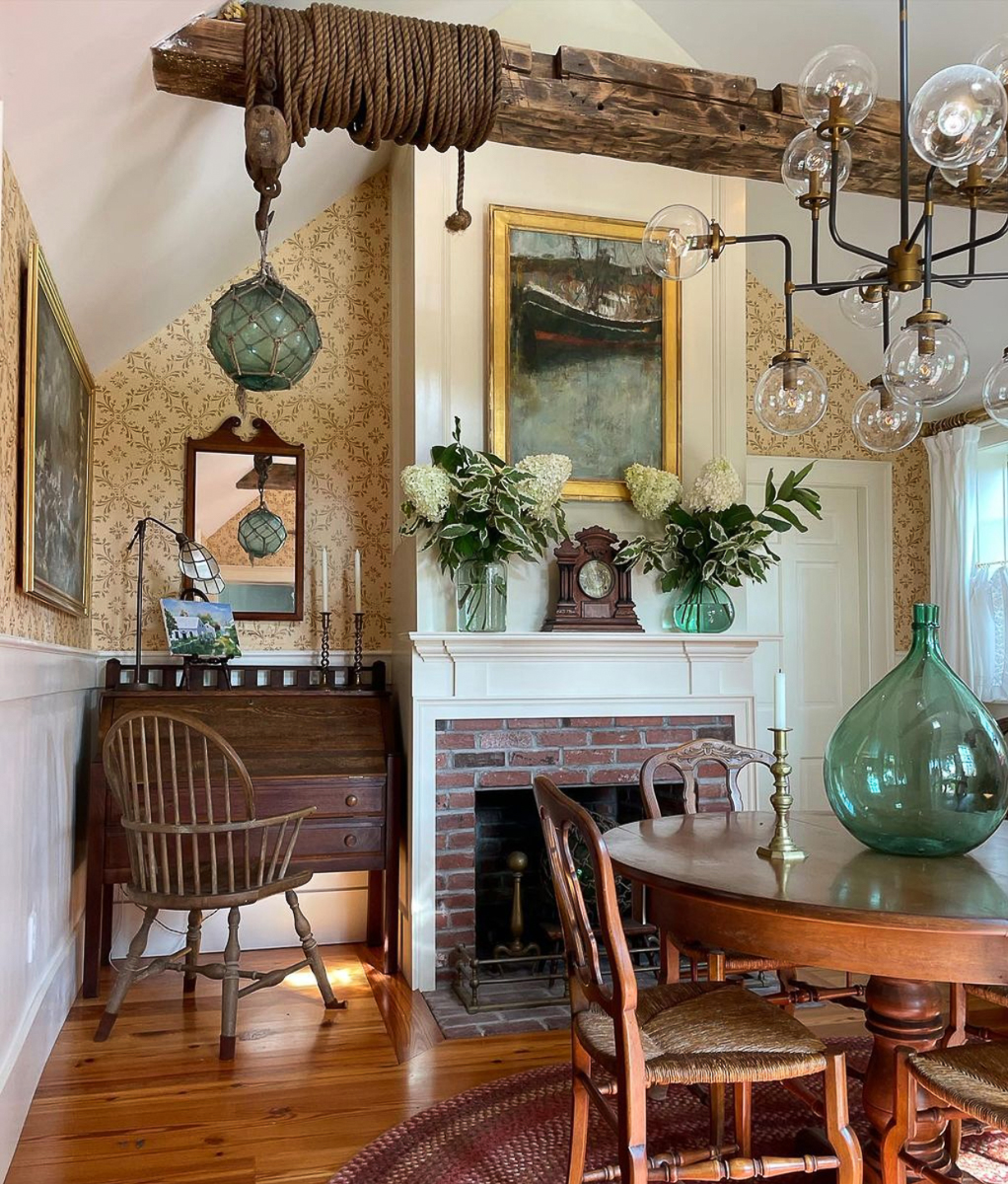 Founded in 1727, Provincetown (or Ptown as the locals call it) is located at the northern tip of Cape Cod, Massachusetts. This seaside town is on the site of the Mayflower’s landing in 1620.

Picturesque old sea captain’s houses and modest cottages that line the streets are steeped in history and it’s a hot spot during the summer months but charming any time of the year. 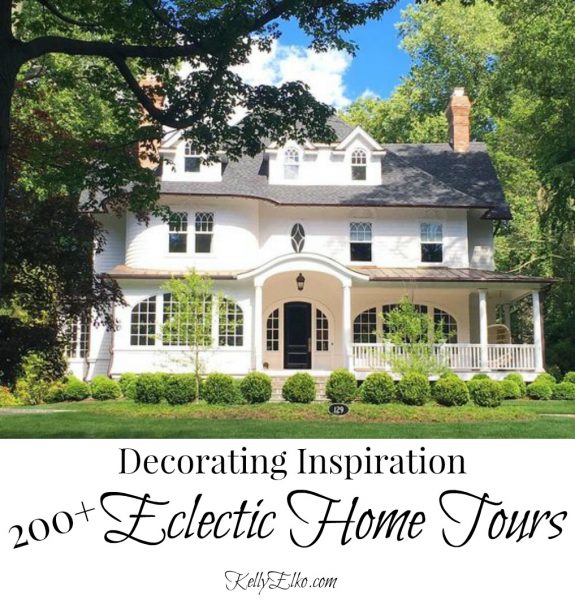 The house, affectionally named The Groggy Anchor, is the East Coast escape owned by Steve and Colin who split their time between Provincetown and San Francisco. 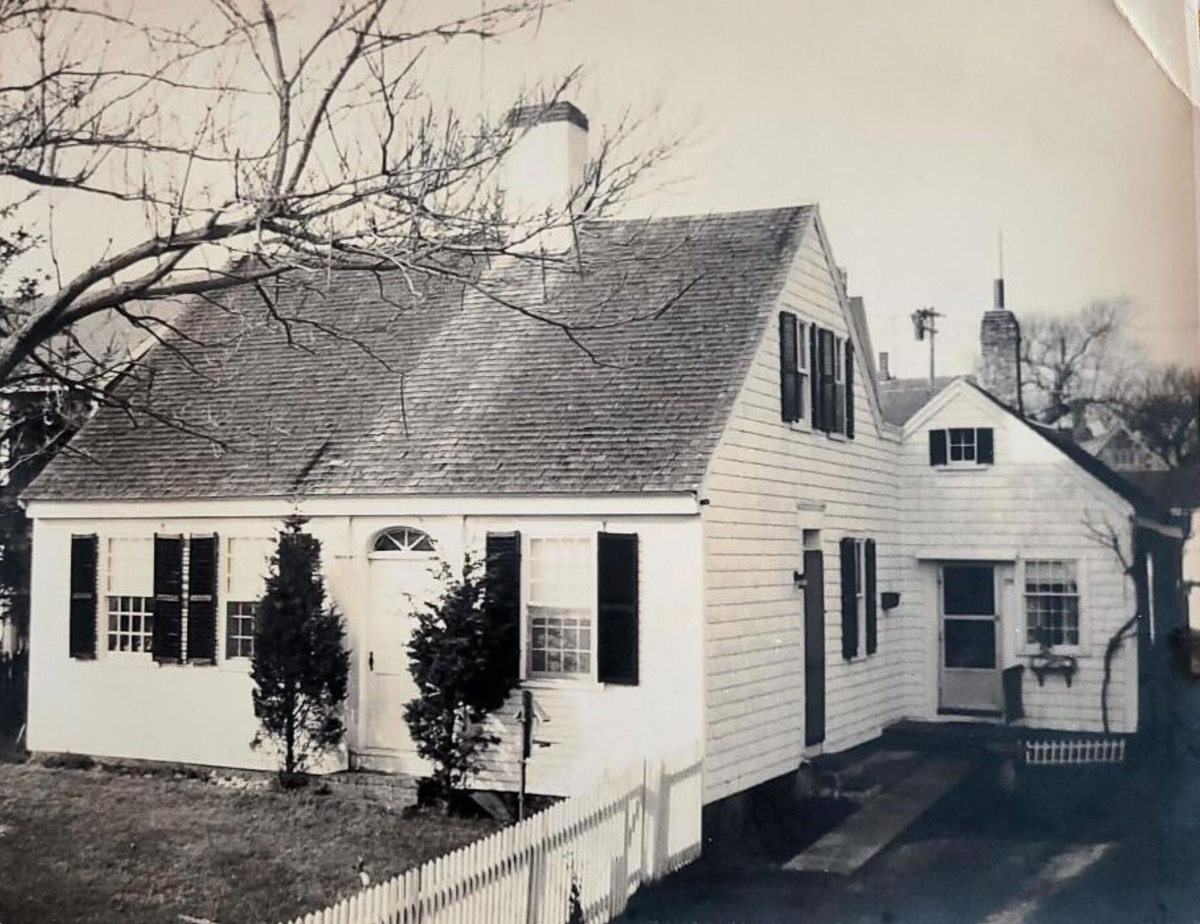 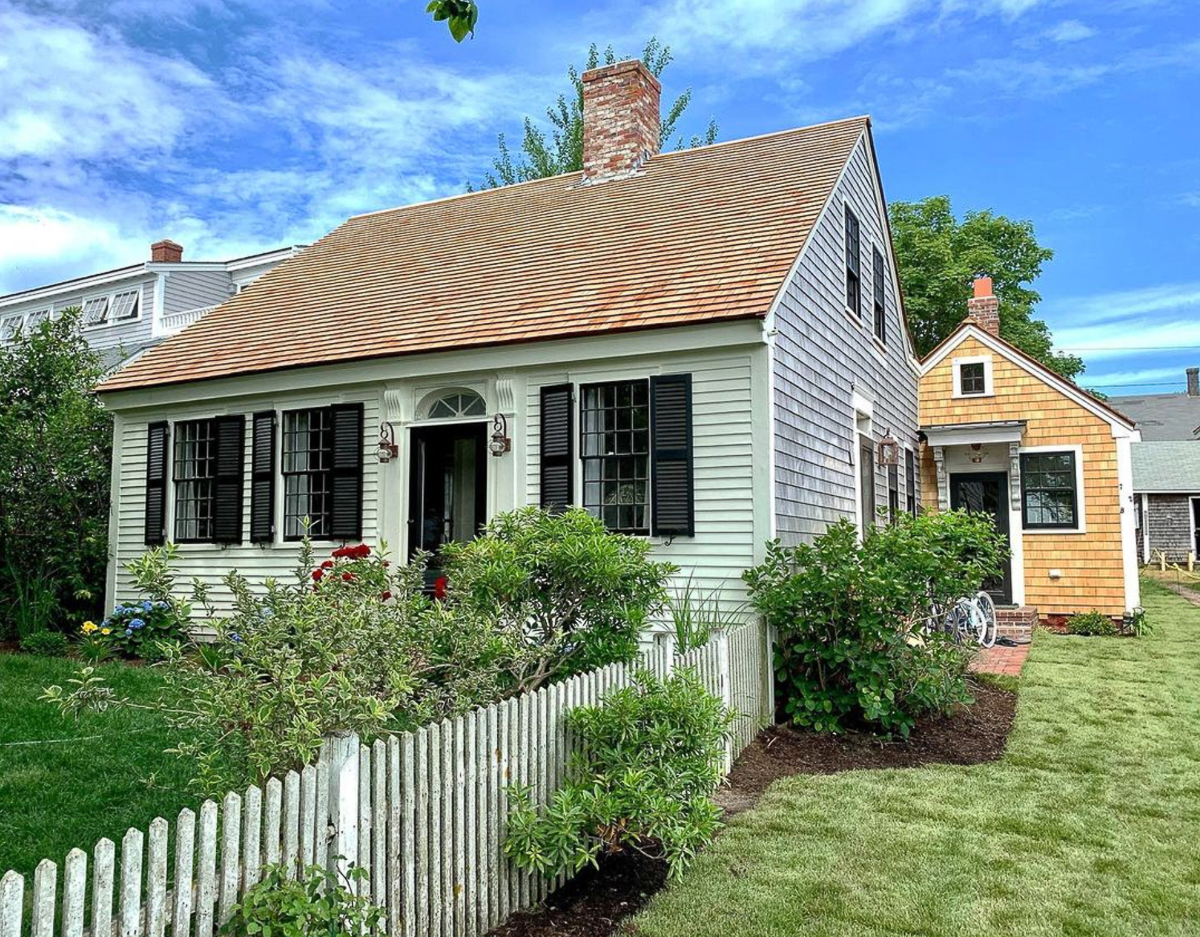 Now the house oozes curb appeal from the 200-year-old windows painted black with working shutters, to the white picket fence (that their neighbor was throwing away), to the hydrangeas and geraniums flanking the front door. 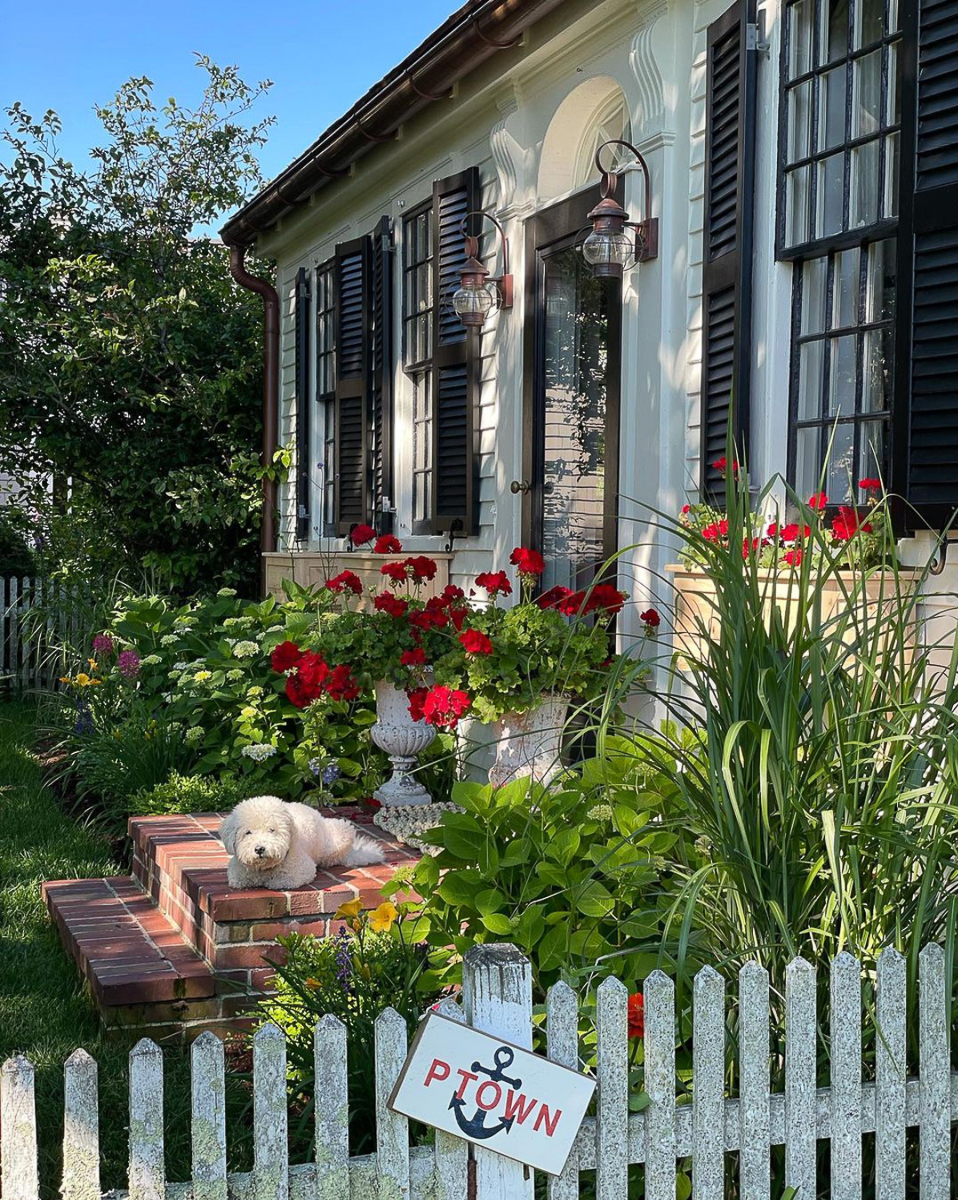 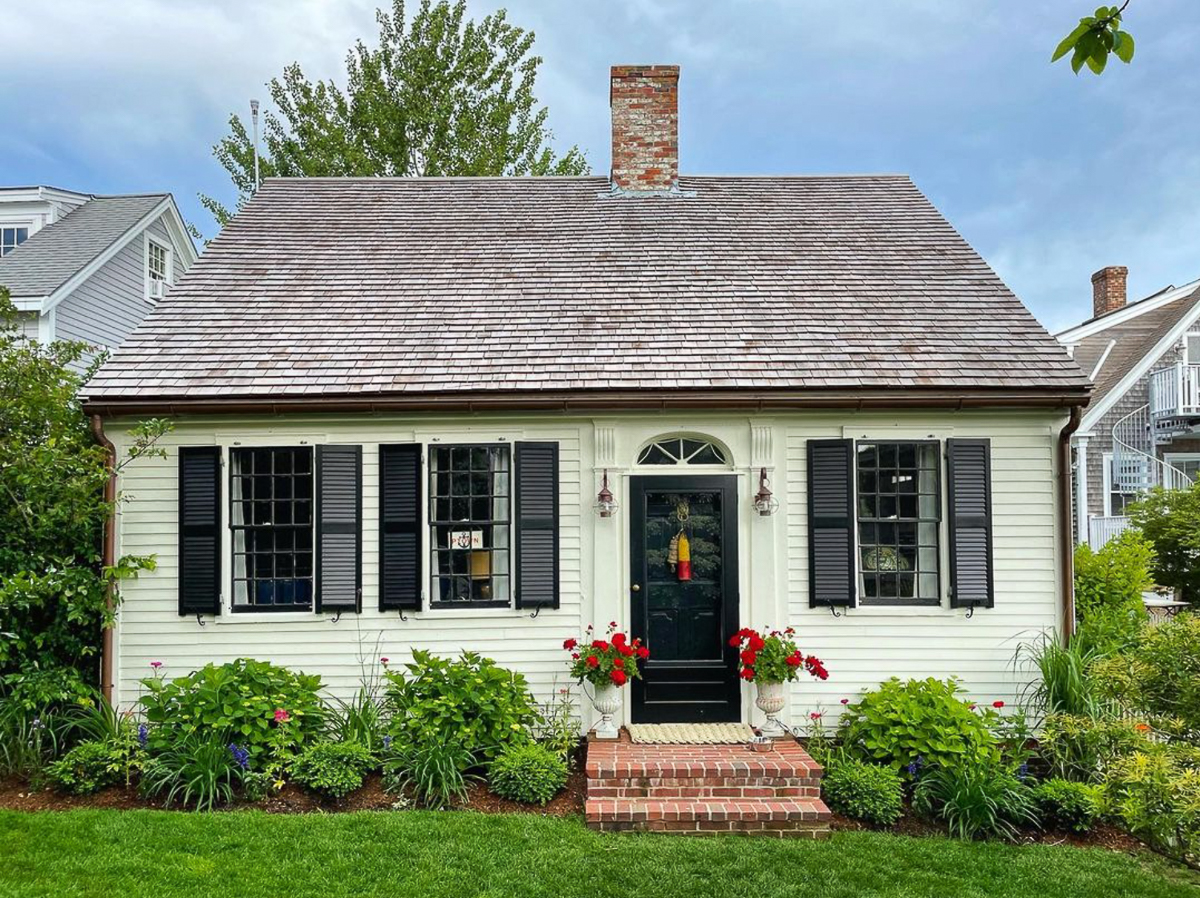 Steve tells us, “We kept the original kitchen footprint but raised the ceiling as it previously slanted so you couldn’t stand at one end. That’s antique heart pine on the floors, walnut on the counters and red cedar on the ceiling.” 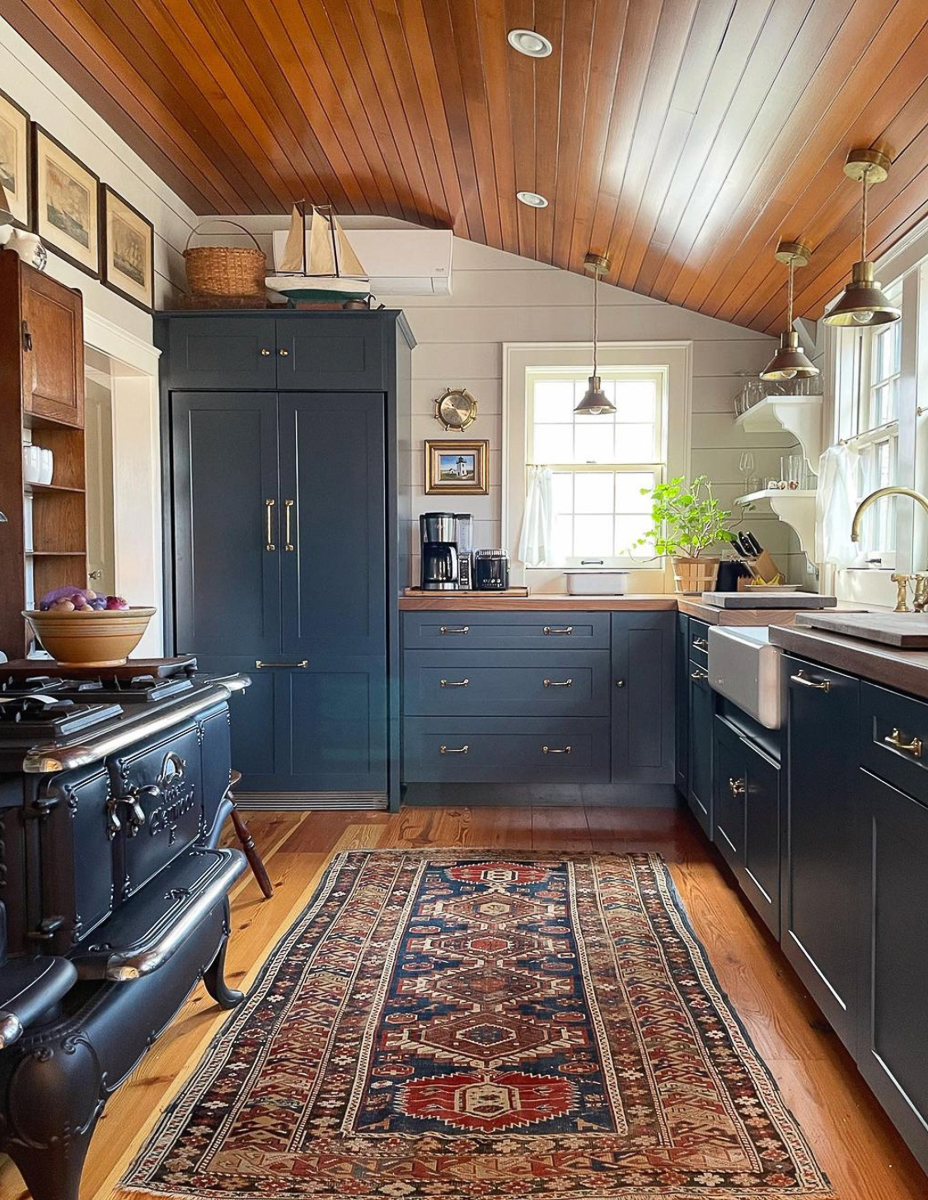 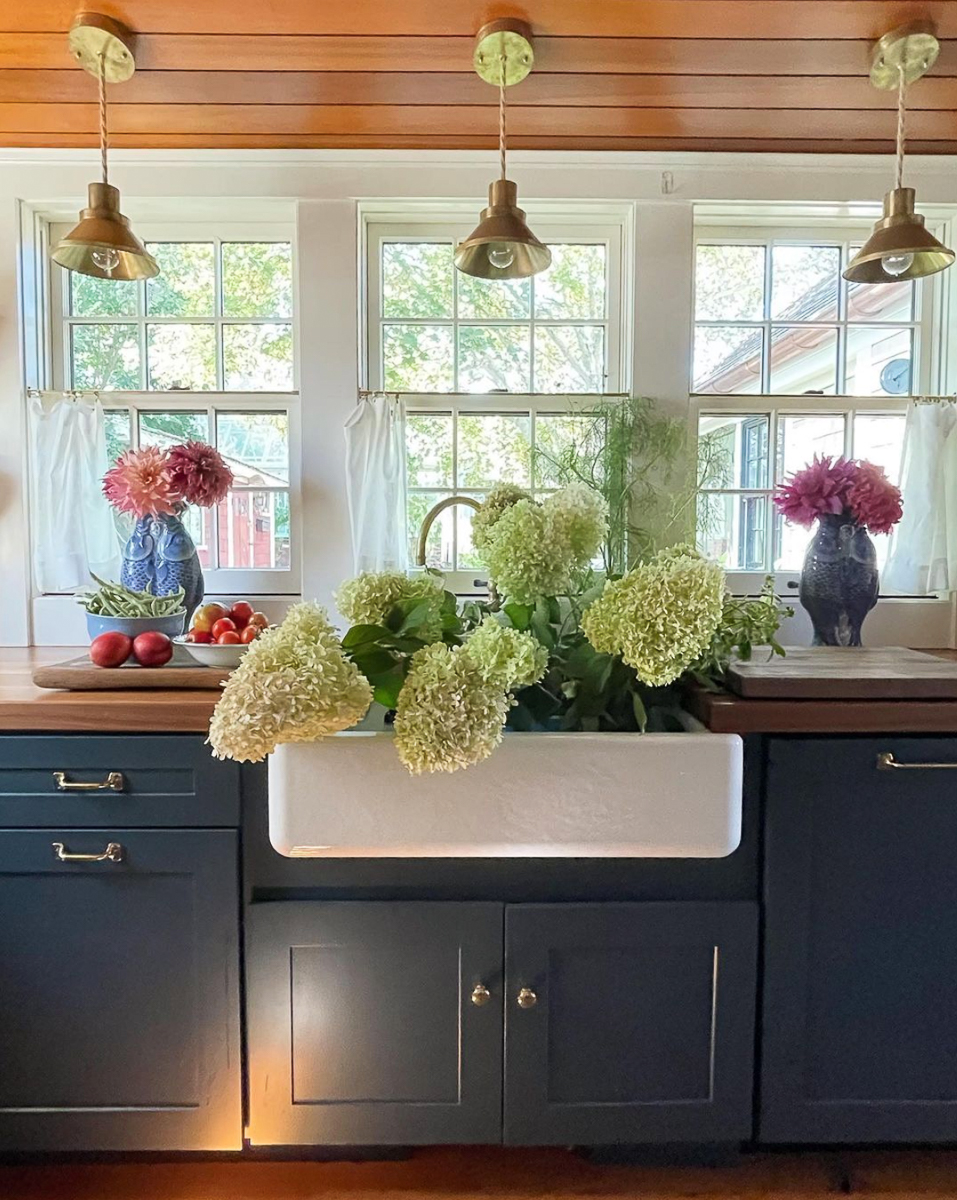 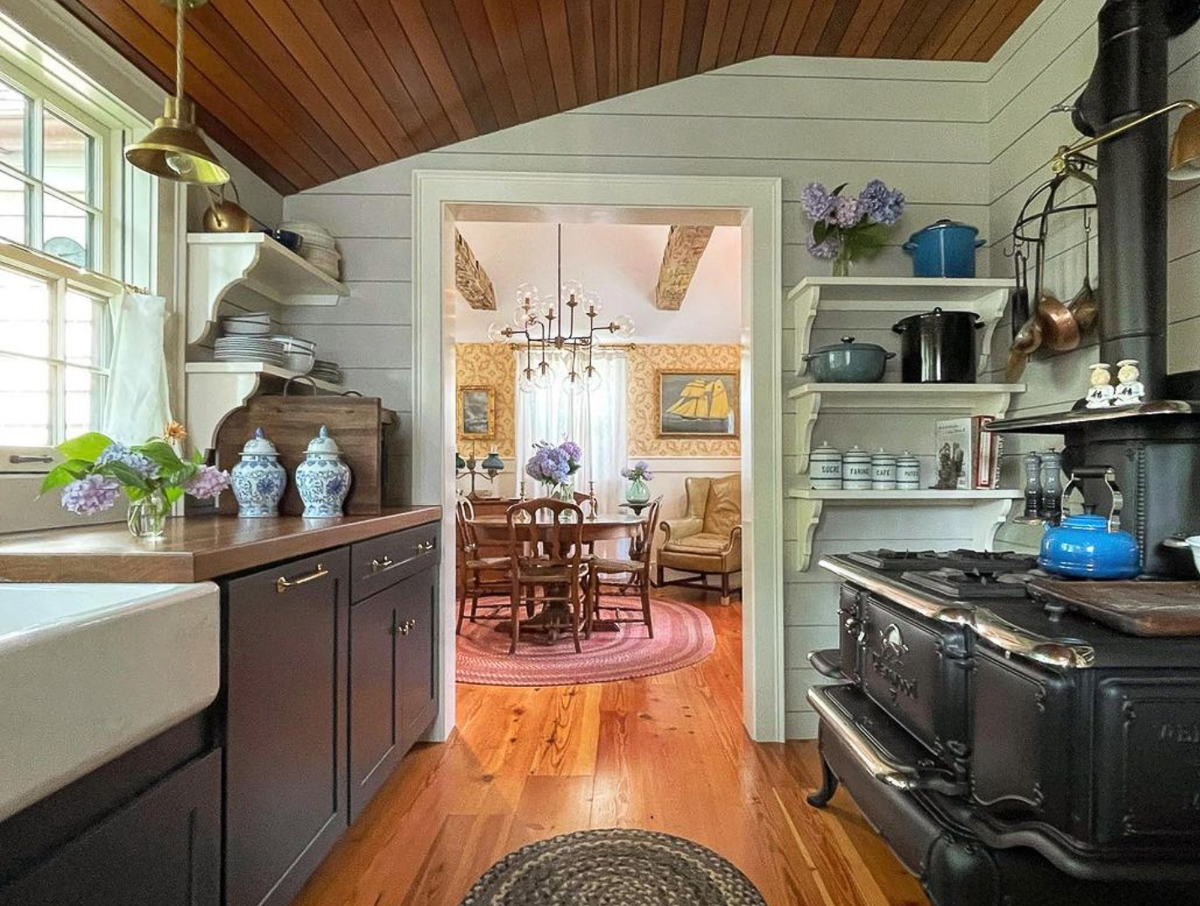 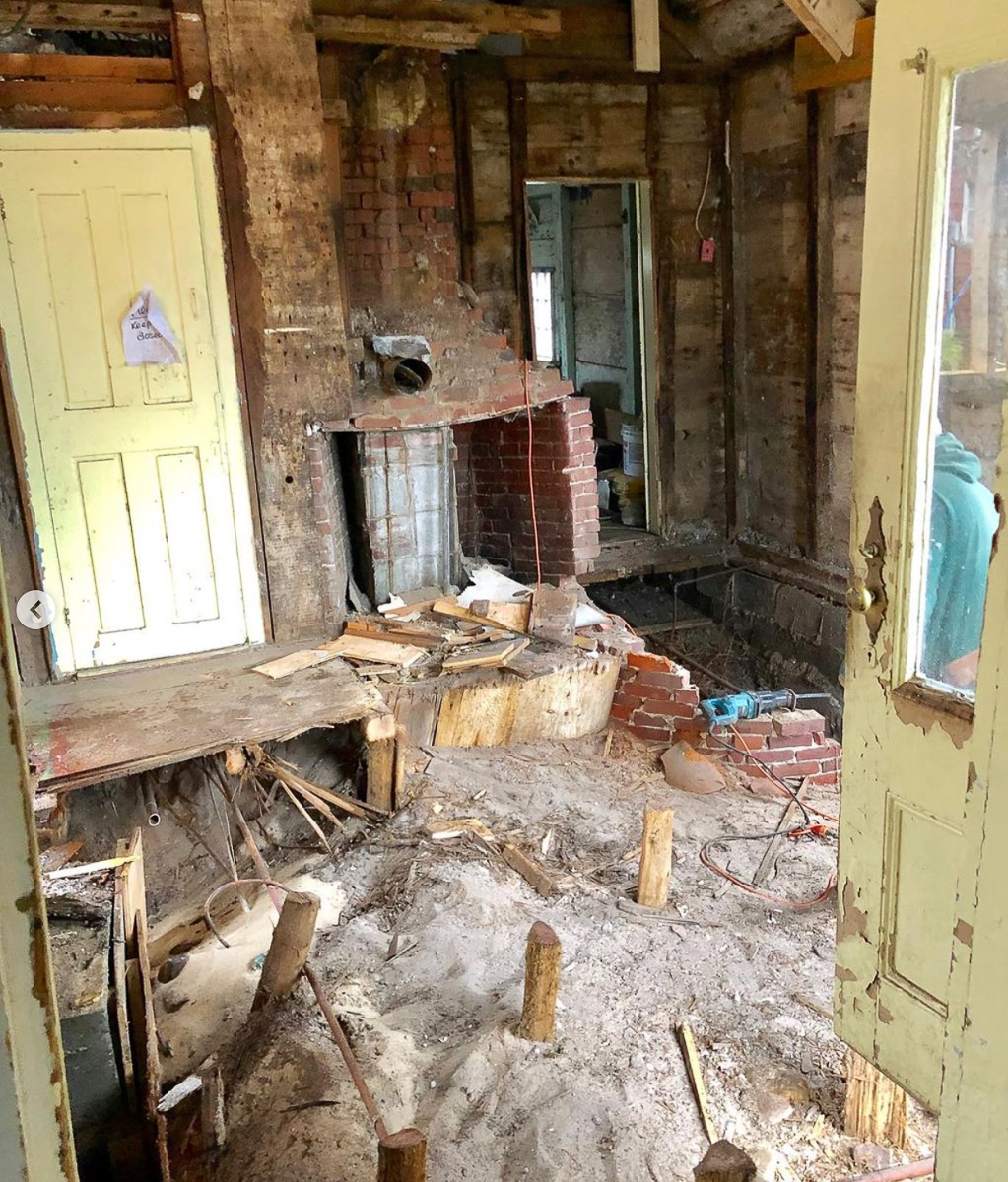 Steve shares a fun before and after, “The dining room was leaning so far to the left we had to take down the plaster to straighten the walls. It would have been far less expensive to tear it down and rebuild, but we wanted to maintain the integrity of the structure. When we took up the linoleum floors, we found all that was holding up this room were tree stumps driven into the sand! Apparently a pretty common practice when basically building on top of sand dunes back in the day. Look closely and you can catch a glimpse of an original circular cellar that would have been used to store food.” 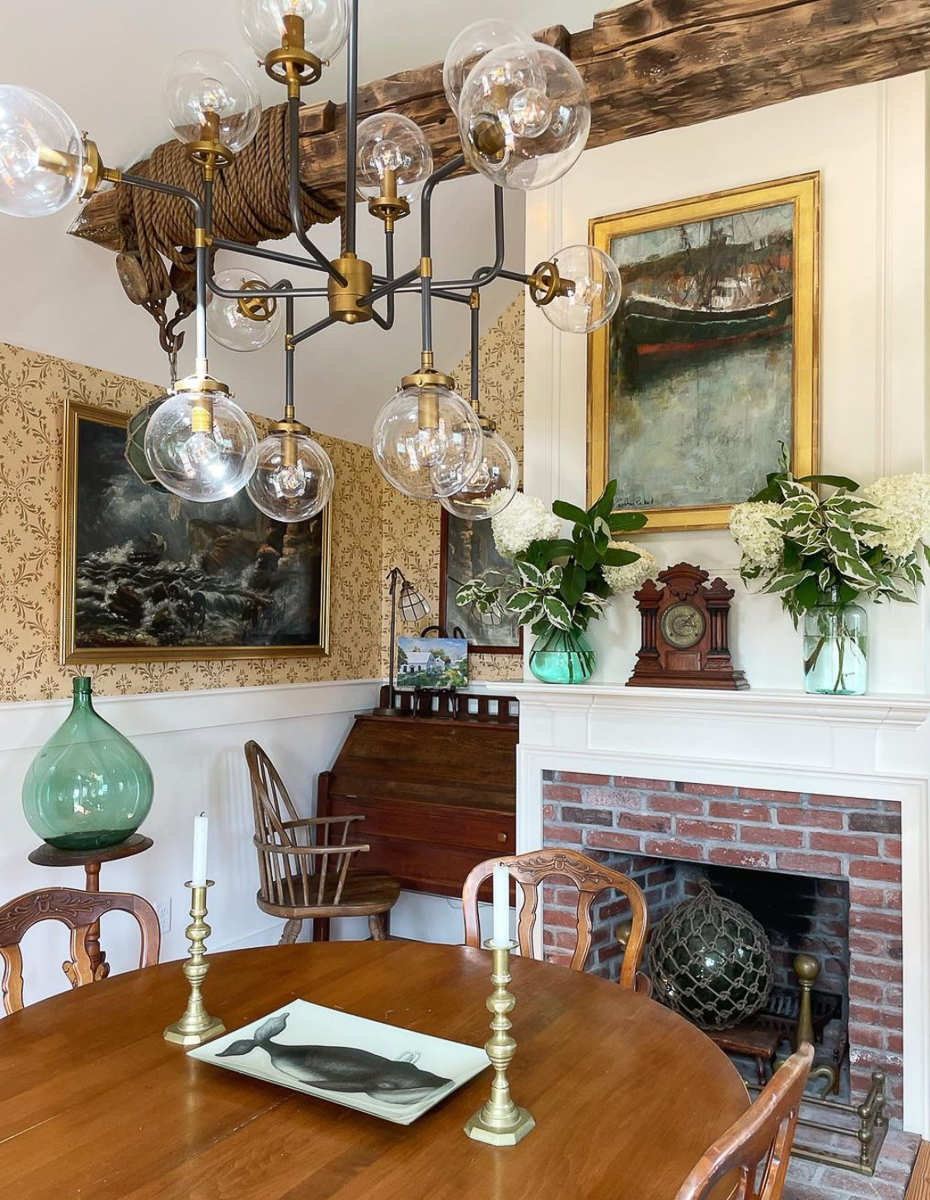 A unique nautical touch is the heavy rope wrapped around an original ceiling beam with a pulley to hold an antique fishing buoy. It contrasts nicely with the modern glass and brass chandelier. 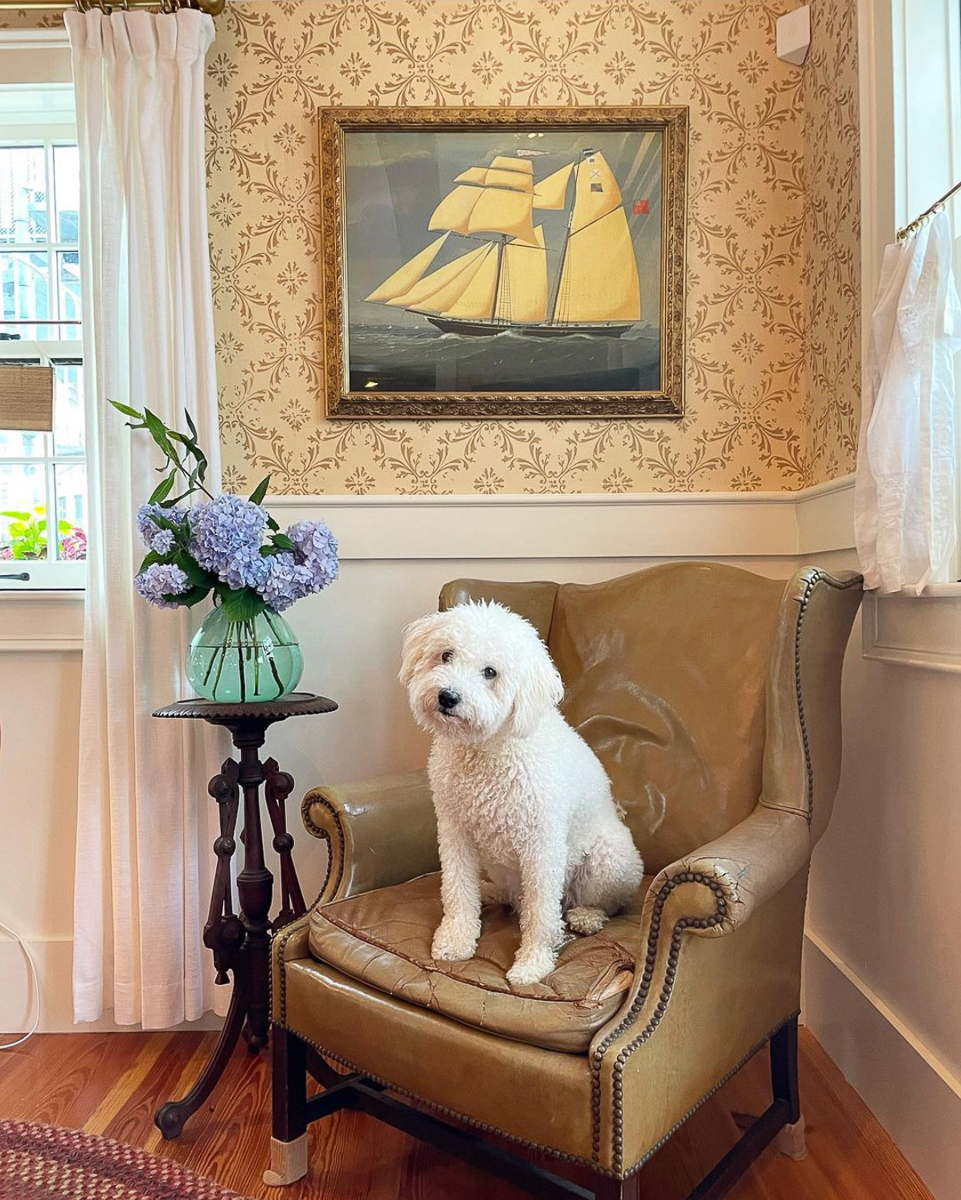 Even the Henry the dog was shocked at the work that lay ahead of them!

The living room got a recent paint upgrade … from stark white to this warm (and historically appropriate) gray (Benjamin Moore – Salem Gray). 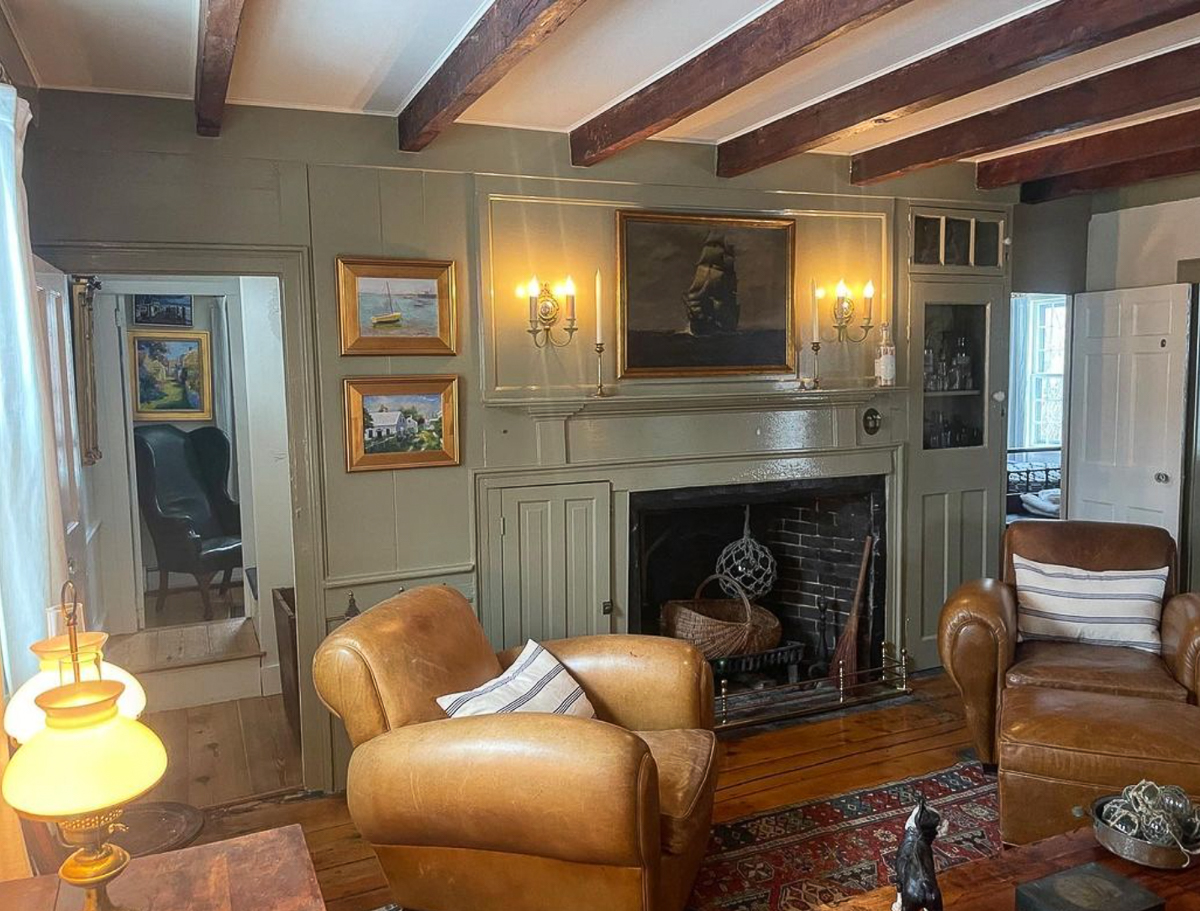 Here’s the other side of the room before the dramatic paint makeover. 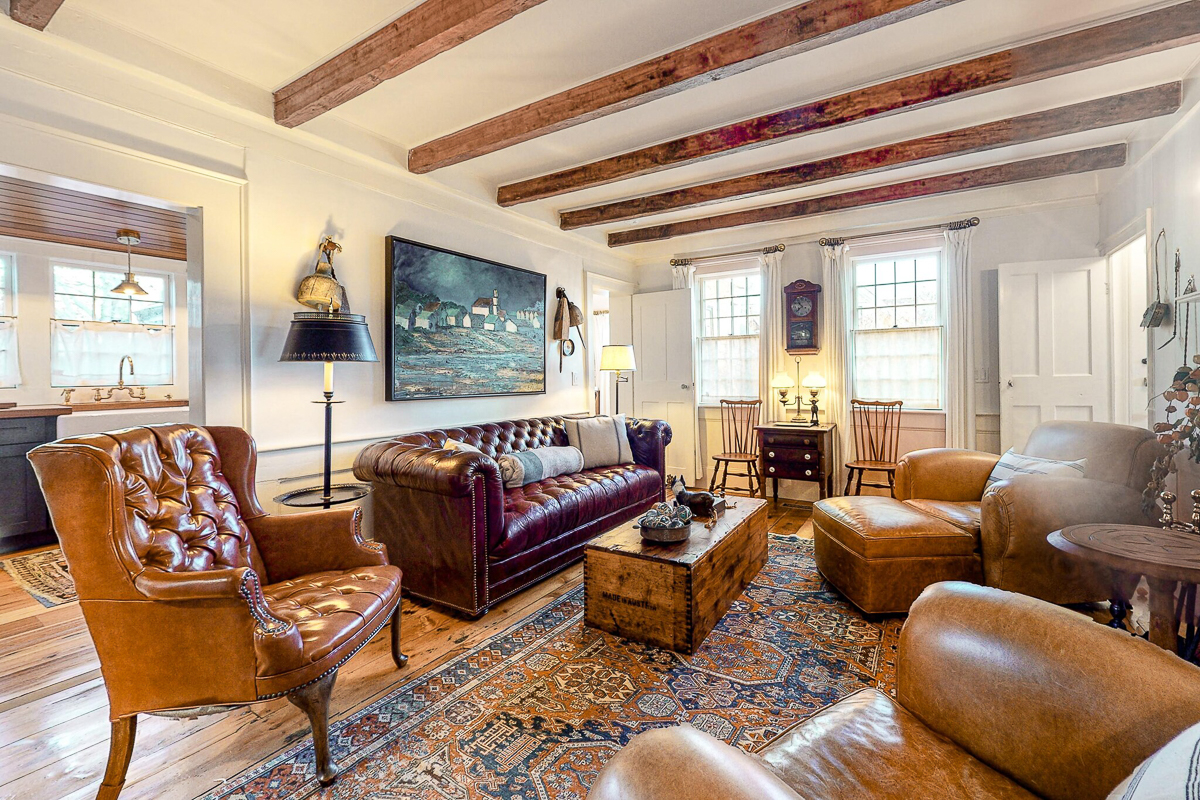 Most of the artwork has been found on the Cape with sailing ships being a common theme throughout the house. 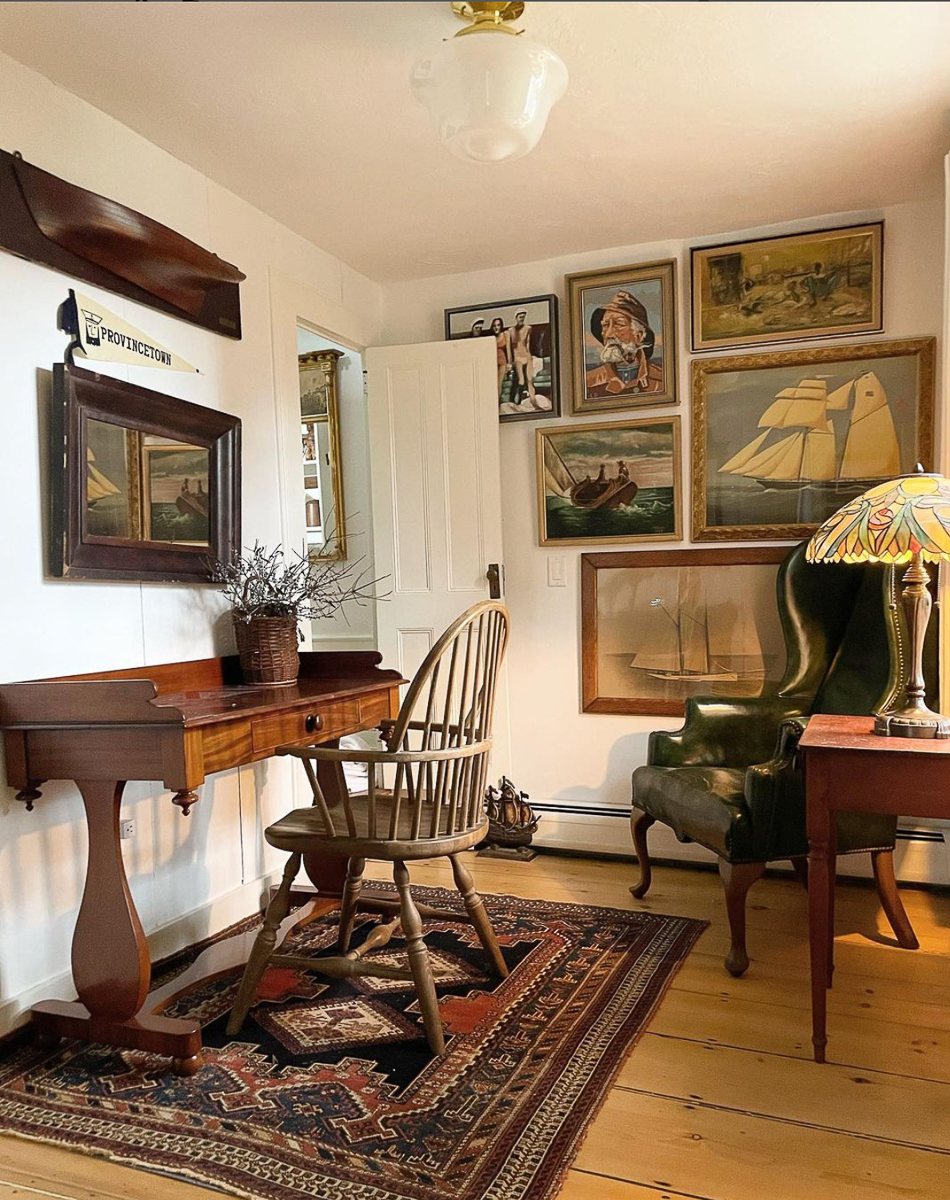 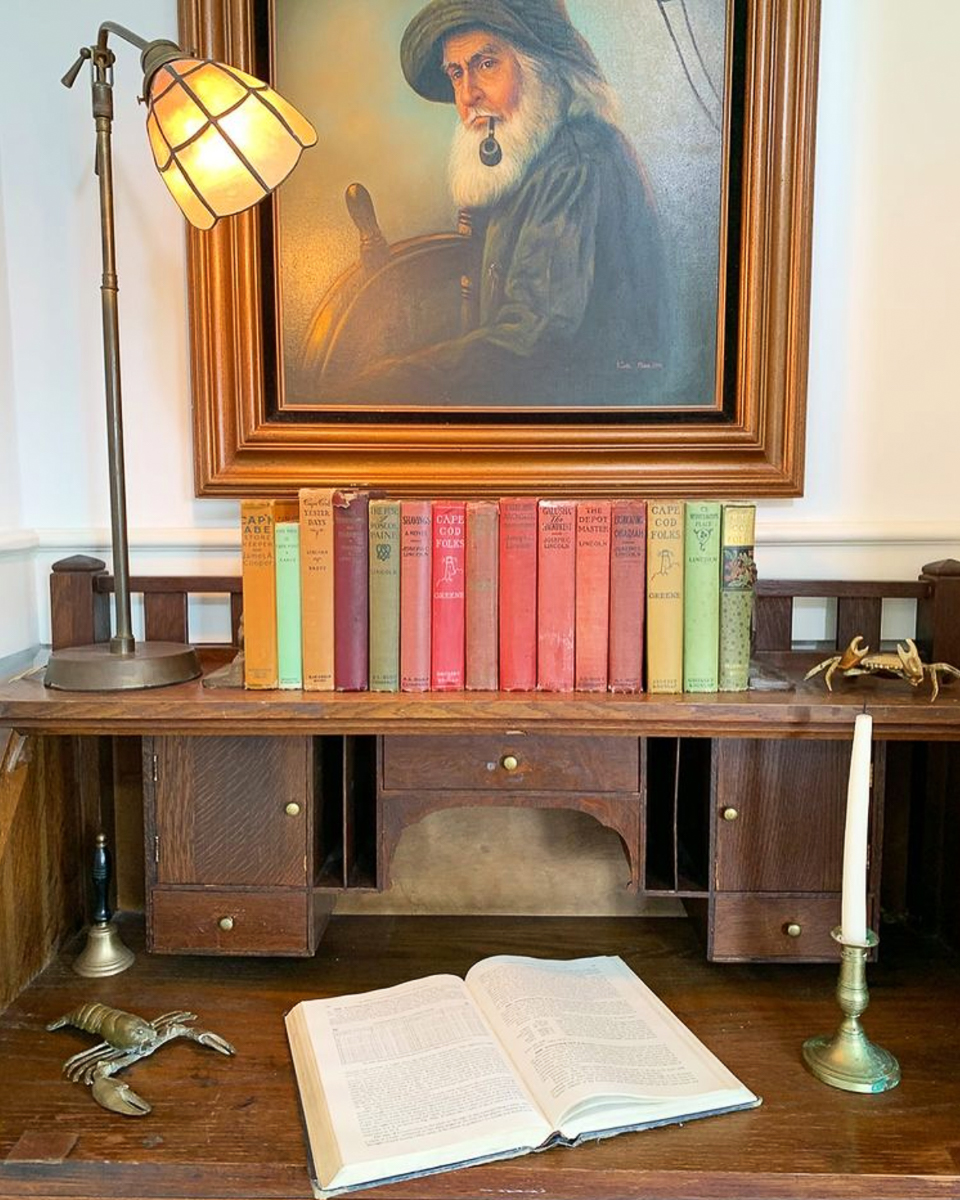 The house has three en-suite bedrooms, two on the first floor and one on the second. 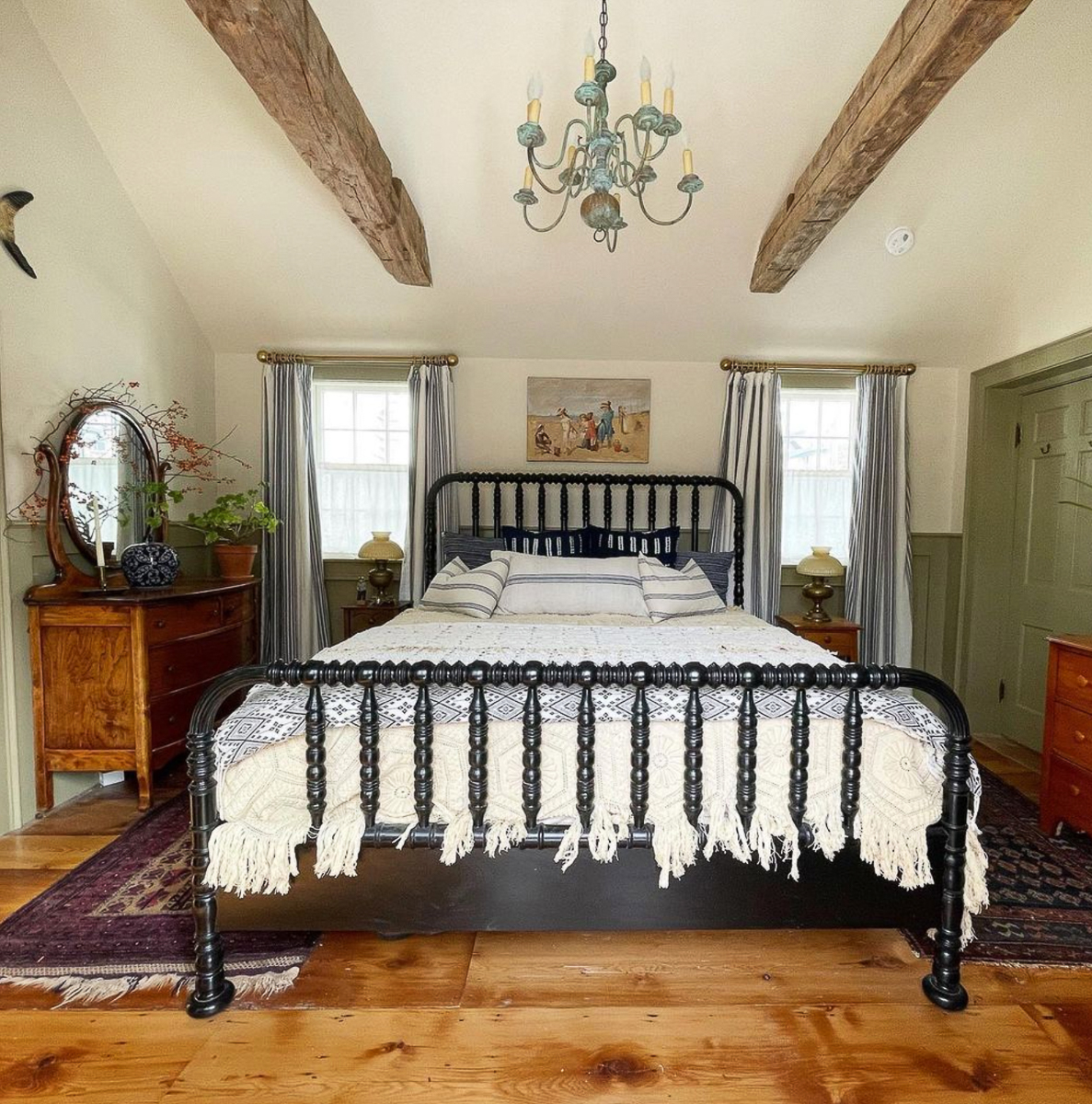 The black Jenny Lind bed is the focal point in this bedroom with original wide plank floors and soaring ceilings. 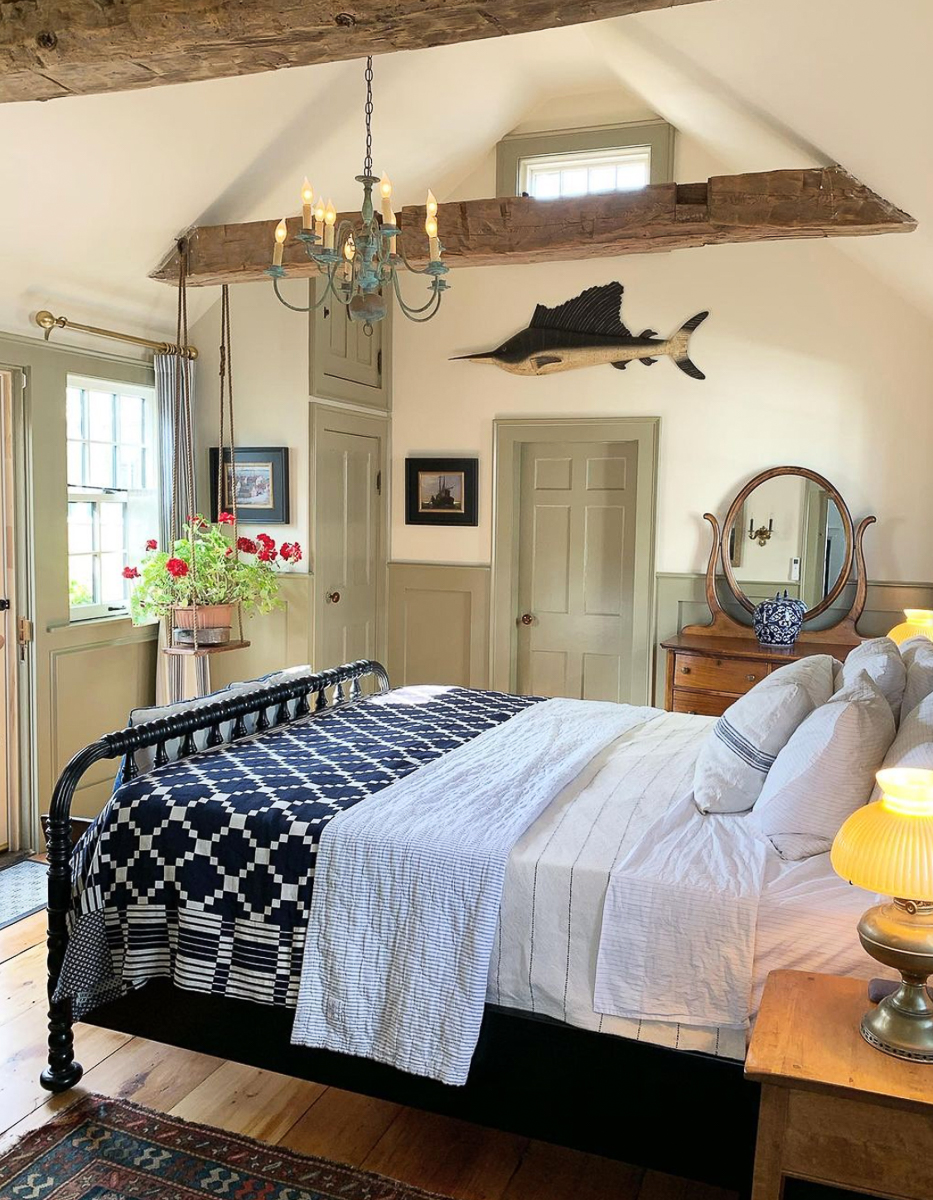 The little swing that acts as a charming little plant stand was originally a ship bosun’s chair. 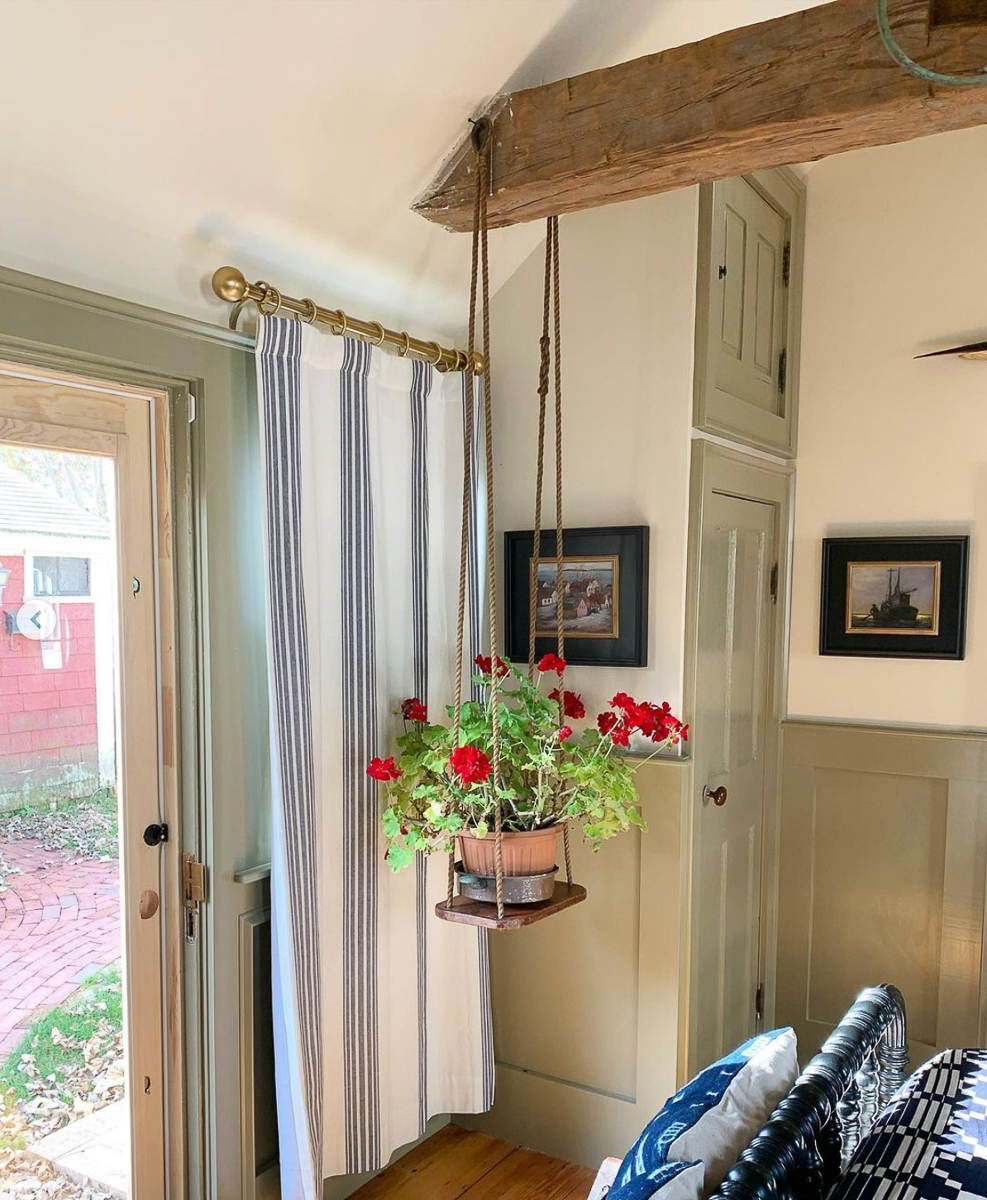 This bathroom is “one of our favorite rooms in the house. This was a wood shed when we bought it. We raised the roofline and scored an adorable little bathroom featuring vertical bead board, wide pine floorboards from an 18th century tavern in Maine, antique mirror and vintage rug. My bro made us the jelly cabinet out of wood salvaged from the project, Steve says. 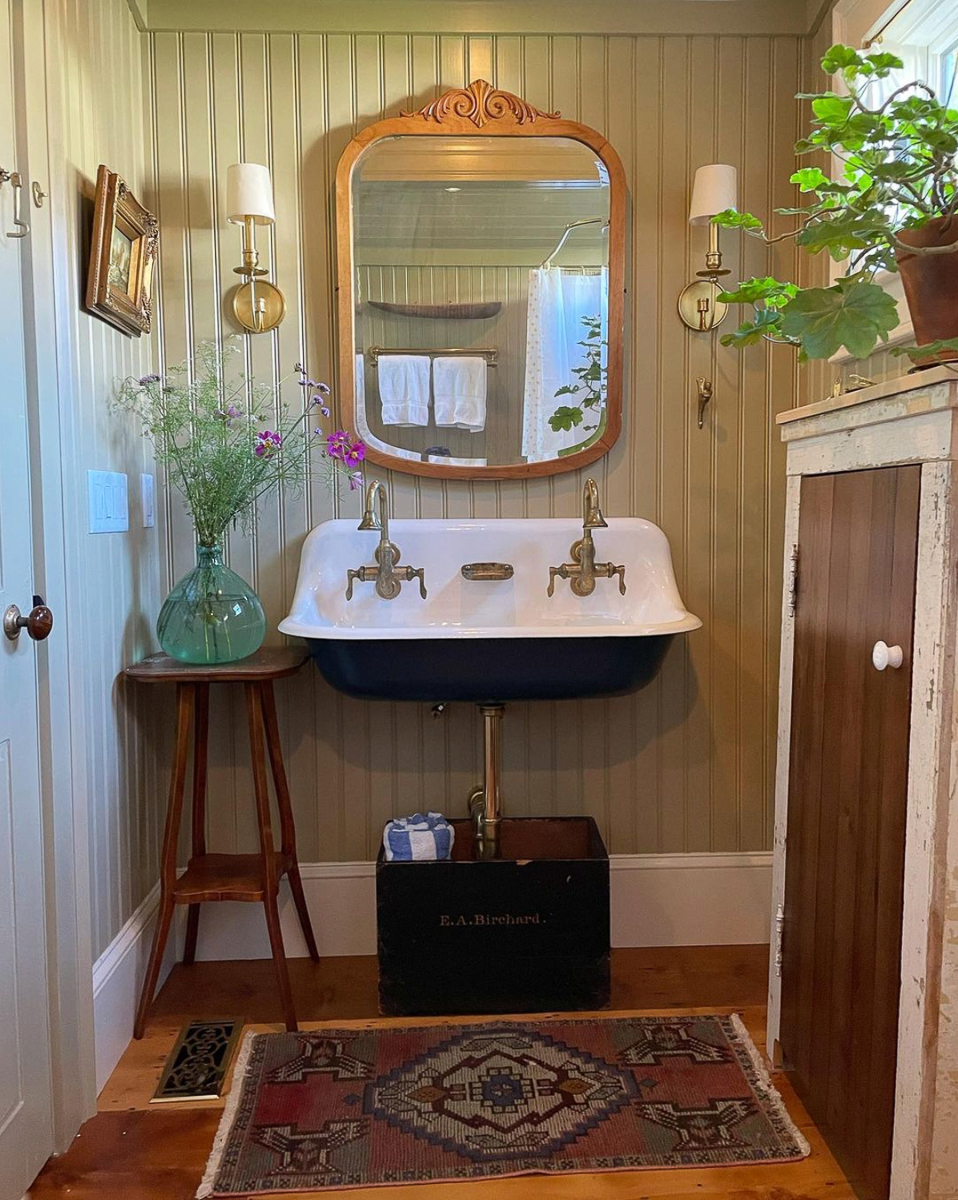 The schoolhouse sink is the star of the bathroom and Steve says, “There’s really no room an old rug can’t make better.” 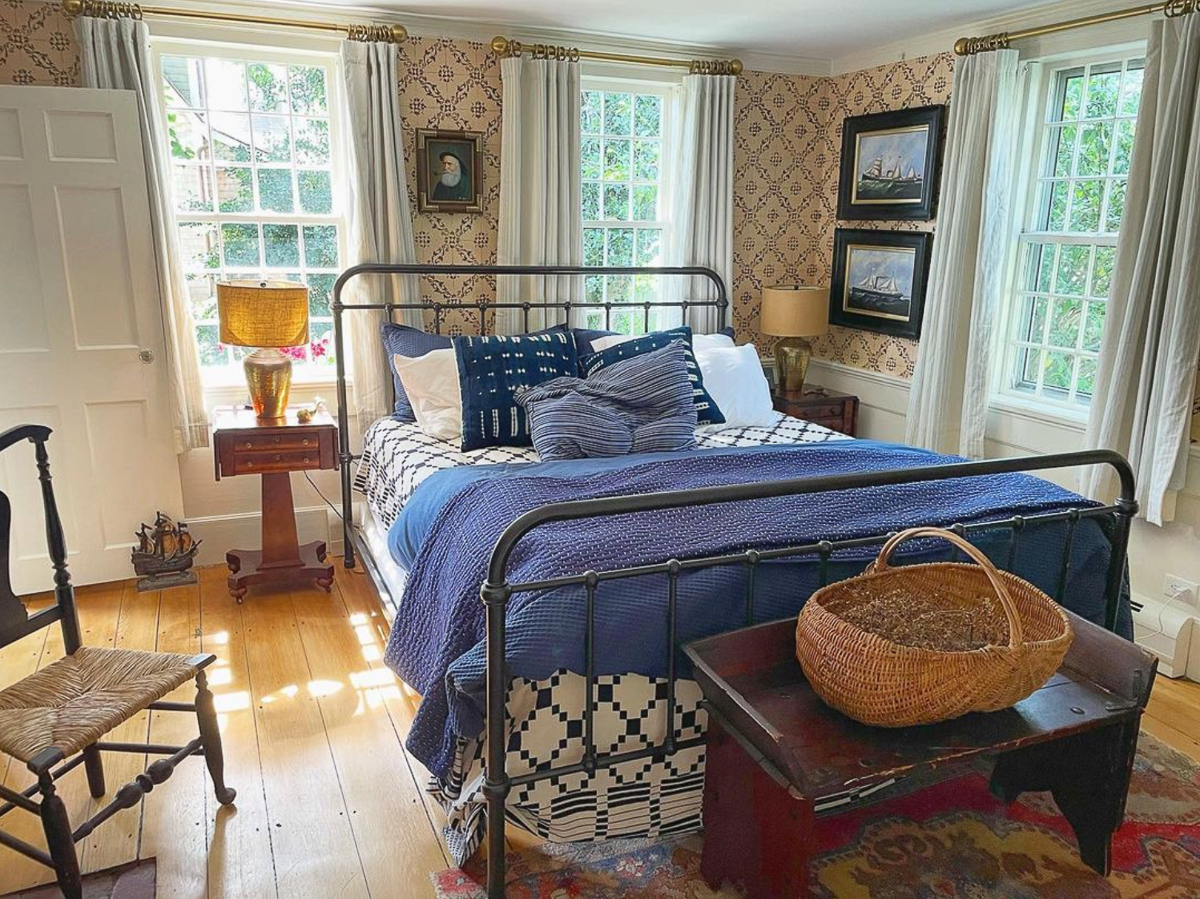 A Rumford fireplace, designed by Count Rumford in the 1790’s, is tall with shallow, angled sides that are designed to reflect heat into the room and minimize smoke. This one in the bedroom is one of Steve and Colin’s favorite features of the house. 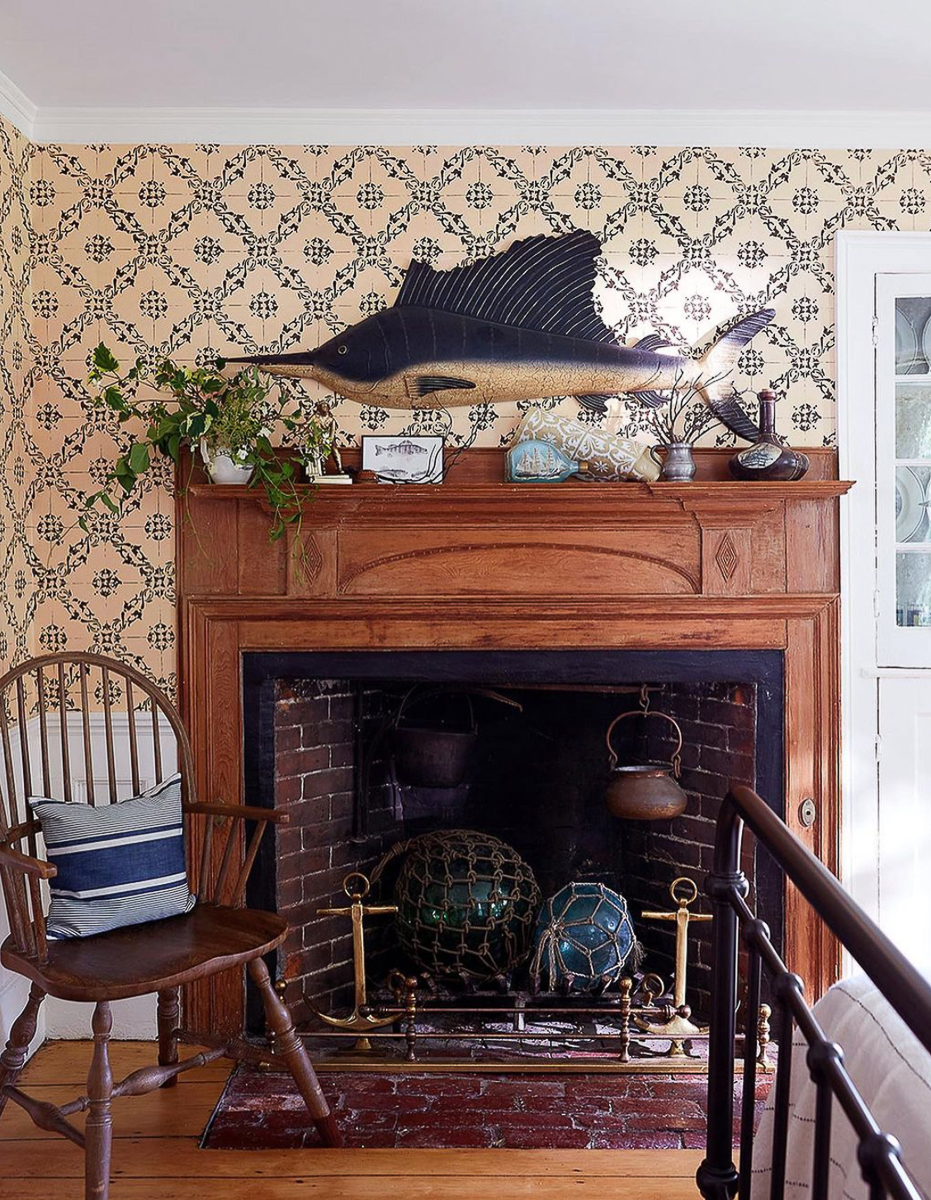 “When the house was built in the late eighteenth century, the mantel would have been painted. We know the mantle was stripped of paint at some point and we loved the warm wood so much, we kept it”, says Steve. 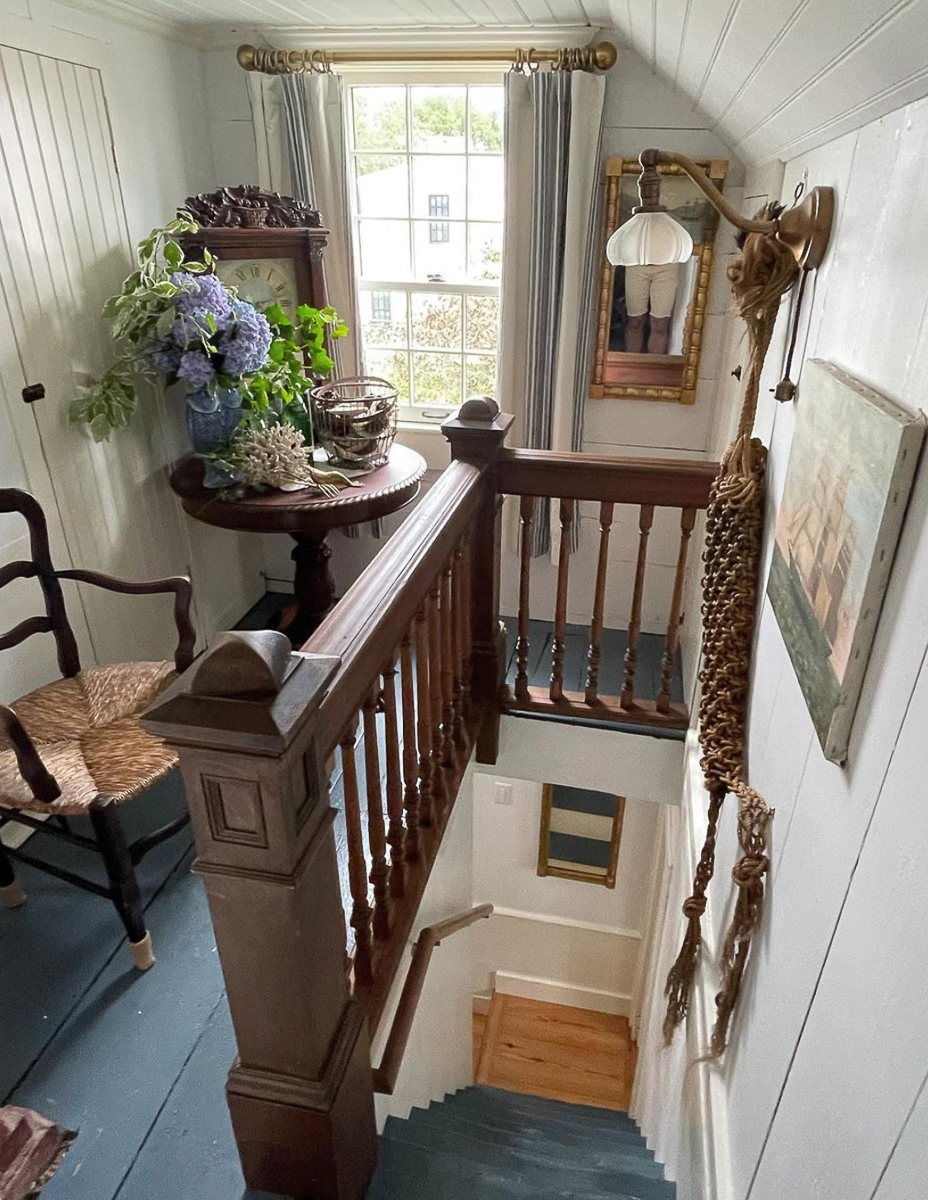 Steve says to “think of them less as stairs and more as an adventure! Legend has it this glorified ladder was built with the wood from shipwrecks offshore.”

The upstairs floors were unified with a few coats of blue paint. 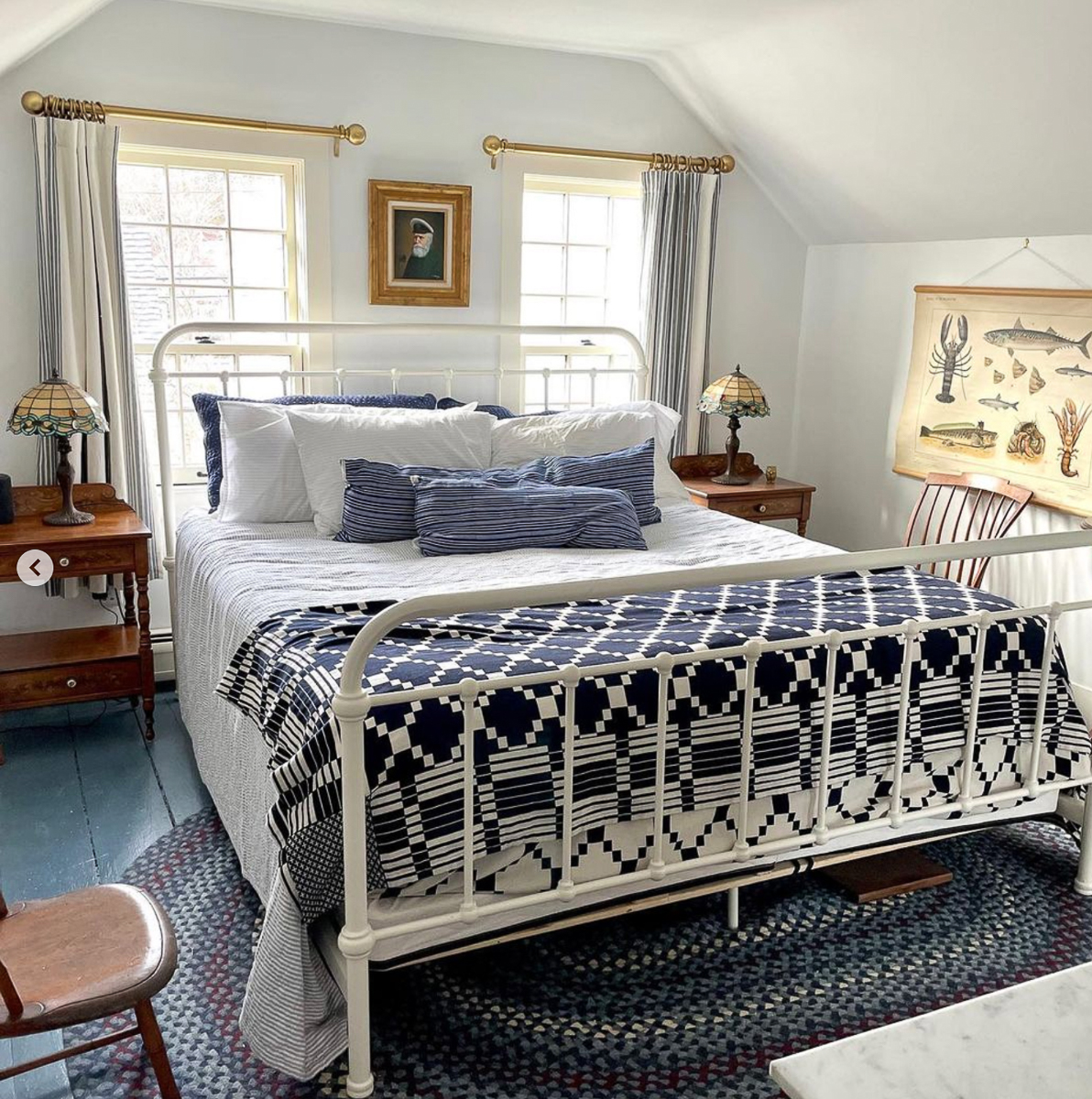 A tiny bedroom was converted into this spacious bathroom complete with antique dresser turned vanity that was found on Facebook Marketplace. 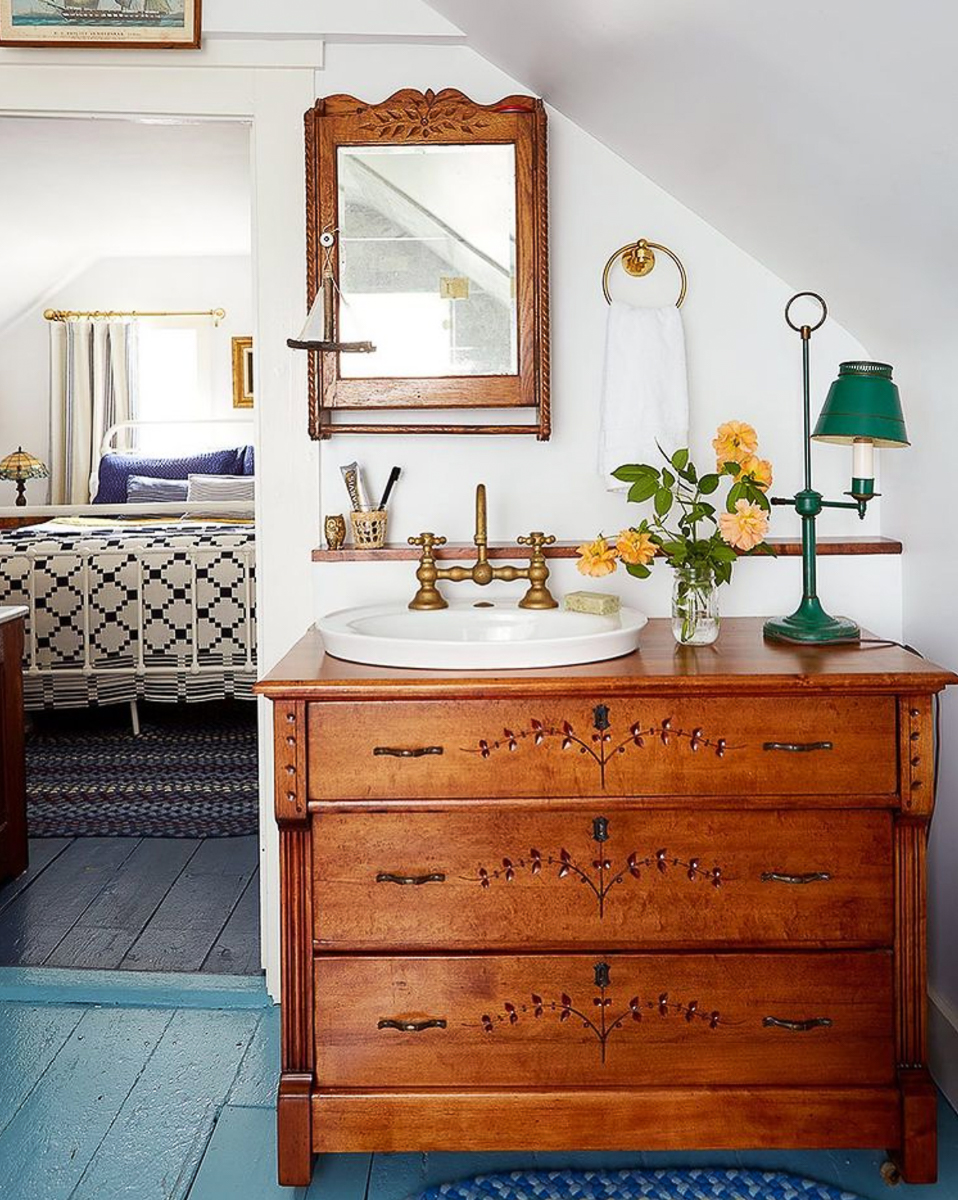 An aerial view shows off the original house, the addition and the grassy alley that was once used for cars (it’s far too narrow for today’s vehicles).

Steve explains that “the rear portion of the back el of the house, added circa 1900, was completely rotted and had no real foundation. In spots, it sat directly on sand. We’ve had to take it down and rebuild it exactly as it was, down to the funky little bump out in the back, which we raised just a tad to accommodate height for a shower.” 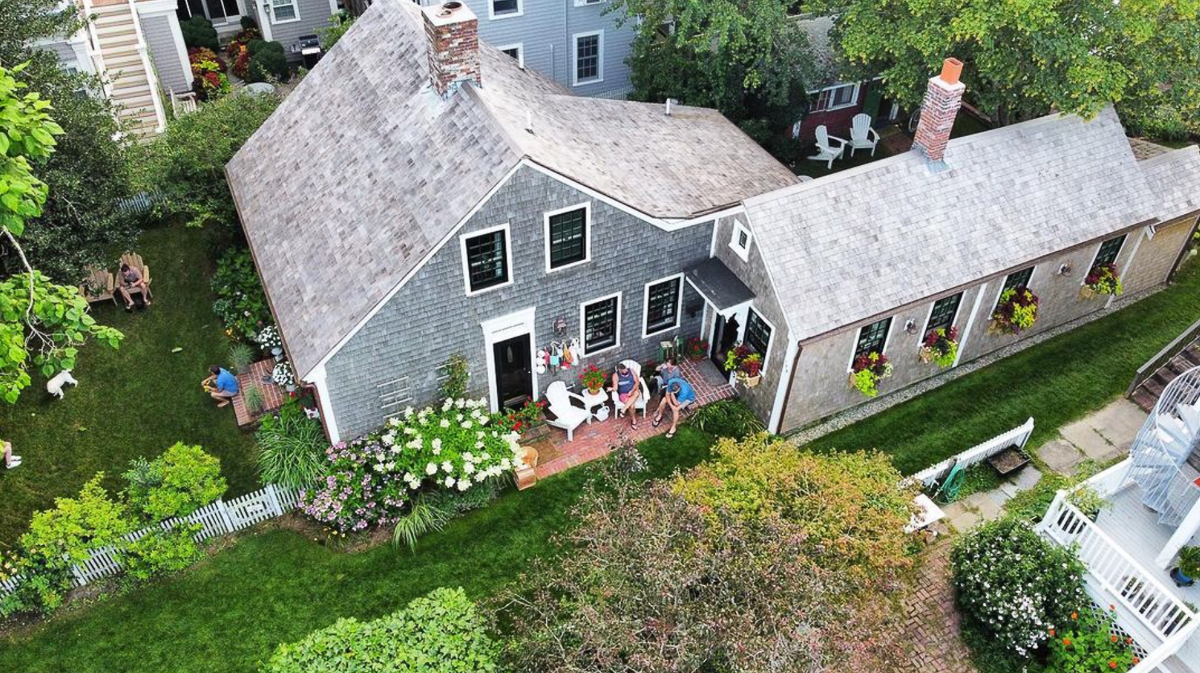 If you visit Provincetown, you’ll see hoards of people flocking towards the town beach to watch the sunset but Steve and Colin only need to step outside of their house to get this breathtaking view. 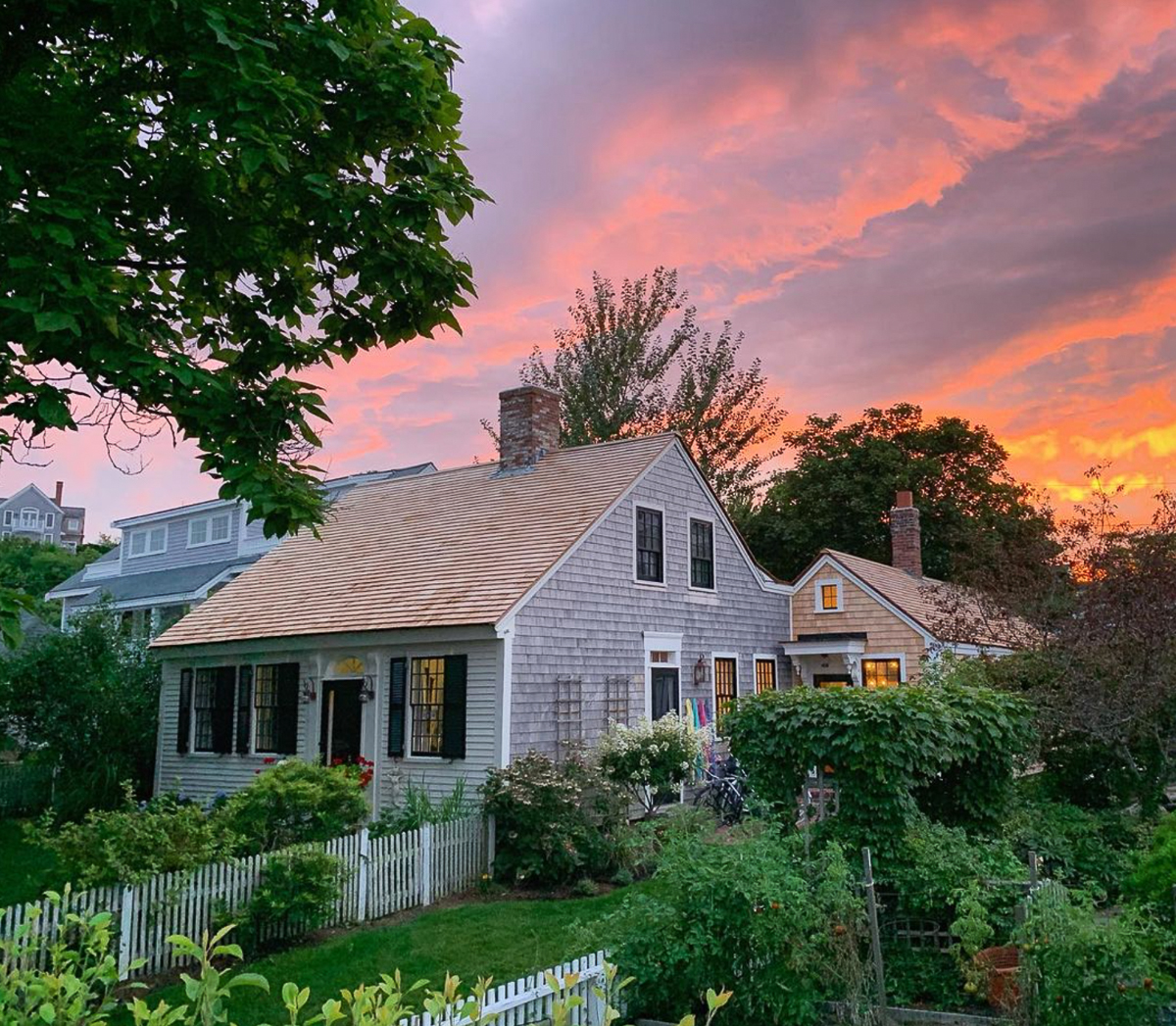 Thanks Steve and Colin for letting us visit.

4519 shares
« Previous: Extra! Extra! Chapter 7
Next: Touches of Spring Home Tour and the Legend of the Brown Egg! »

Your information will never be shared or sold to a 3rd party.
4519 shares